# Multilingual Projects on the NLG Platform

Translating, just like writing, did not scale in the past. The production of translations was as dependent on the number of translators involved, as much as text production was on its writers.

The NLG Platform provides good conditions for the distribution of multilingual content. More than 100 languages are currently available on the platform (plus different versions for countries and regions).

# What to Expect From This Guide?

In this guide you will learn how to plan and setup a project on the NLG Platform that can generate results in multiple languages.

It also covers the preparatory considerations and steps you need to take. Since setting up logic and conditions in Transform as well as using branches and containers in Write are essentially the same in multilingual projects as in monolingual projects, there are no lessons on the platform in this guide.

The prerequisite for this guide is the AX Seminaropen in new window.

Today there are two automated solutions for translation available: on the one hand automated translation (also machine translation), and on the other hand, the automated multilingual text production.

In contrast, with automated text generation, translation does not take place after generation, but is part of the text project. In these projects, data, logics, structure and variance of the text is processed centrally. The texts in different languages are generated out of one project.

Instead of making multiple copies of one text, on the the NLG Platform the semantic rules are created separately from the language and can therefore be applied to any language. Only the linguistic elements have to be adapted. Quality control is implemented centrally in the project.

These synergies mean that with AX Semantics, you can localize contents into multiple languages much faster. 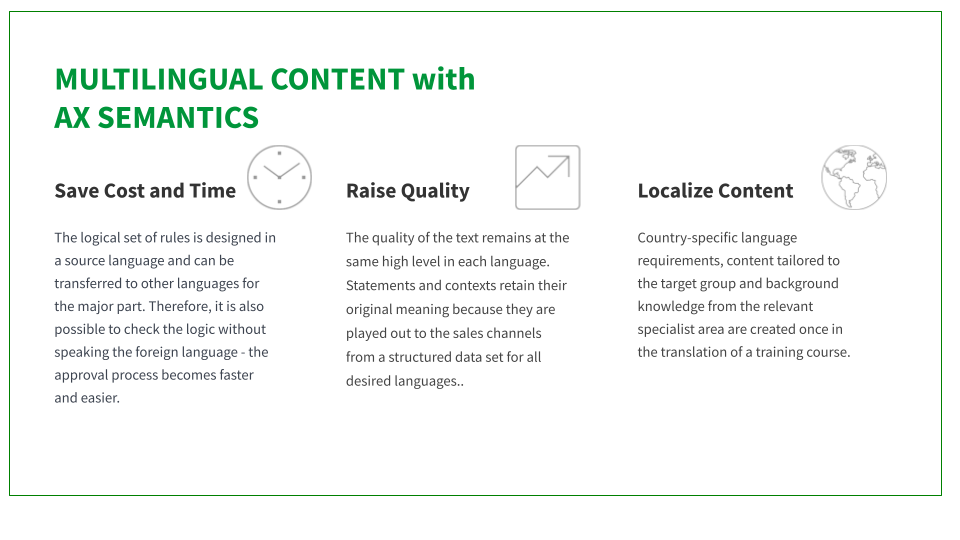 What are the benefits of multilingual automated text generation in comparison to the translation of texts (also machine translation)? The individual benefits are more or less pronounced depending on the size of the project, the number of languages and other factors specific to the particular use case.

Designing multilingual text projects spans content issues on the one hand and linguistic features on the other. The general questions to ask in this context are: In what ways will the content differ in various languages? To what extent does this affect the automated text project?

So first of all, it's necessary to describe the broad framework of the project. These initial considerations may even result in fewer languages being implemented first, or in certain parts of the text being excluded from automation because there are too many differences. In some cases you will decide to automate only a part of the content if the requirements are too different.

The framework of a multilingual project can cover, for example:

Due to several languages being created in a common project on the NLG platform, and not produced by a translation after the output of the first language, this leads to special requirements for the form and structure of the data.

First of all, this applies to the language of the data. Data is not always language neutral. Of course, there are cases in which all the data available is in numbers, for example, and it therefore does not matter in which language the target text will be formulated. In most cases, however, there will be words or other values in the data that do not apply to all languages to be generated. Therefore, data has to be available in all target languages. So, if you don't have data in multilingual form, you have to translate the values.

The second important requirement applies to the structure of the data. To be able to set up the project properly, it is necessary that the data has the same, or at least very similar structure, in all languages. 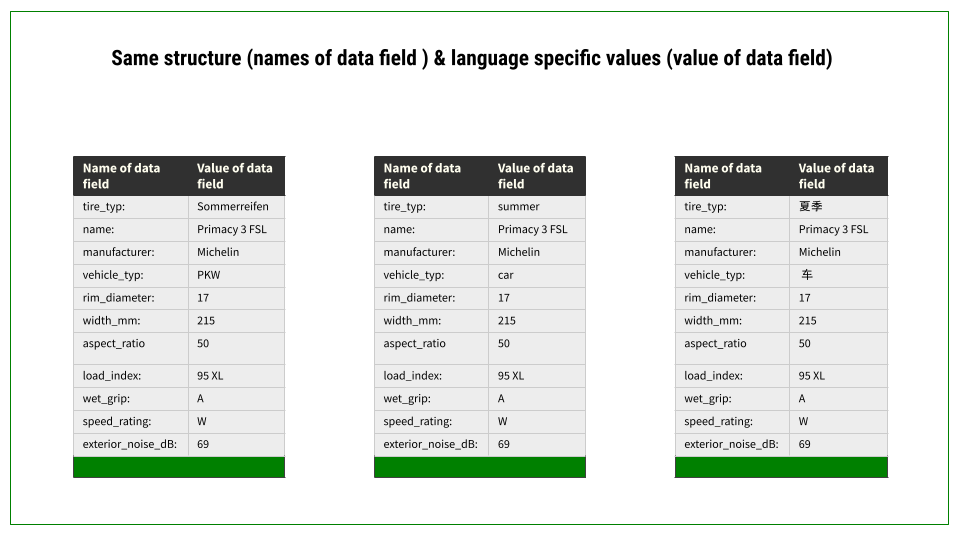 In principle, it is possible to skip the translation of data before creating the project and to translate the data values via a Lookup Table. For this, one can use the same data for all languages and translate them within the project. This procedure only works as long as there are only a few data sets that need to be translated and if the data sets will not change.

As a rule, it is faster and less error-prone to translate the data in advance. Especially the maintenance effort afterwards is significantly lower.

Language settings are attached to Collections

The main language of each project is requested when the project is created. In a next step, you define in the project settings, the languages you want to have access to in this project. However, the properties that affect the data, as well as the language, are mainly organized in collections.

For multilingual projects, each language has to have its separate collection. When a collection is created, the corresponding language is selected from the very beginning.

If you have assigned a language to a collection, the language modules for these languages are activated. That means:

Once a collection is created, it's language can't be changed.

Please ensure the correct language is selected at creation time. 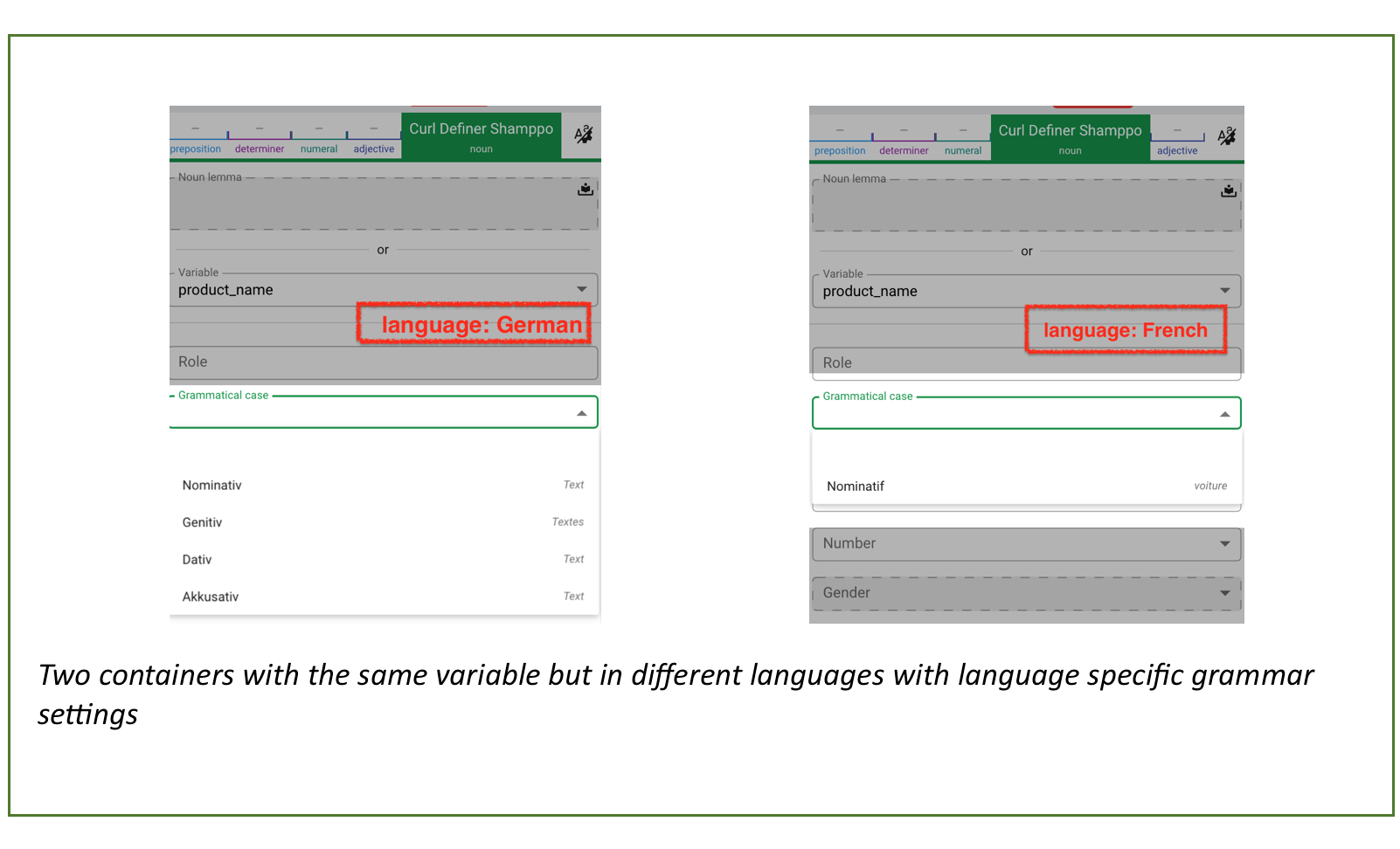 # The Setup of Multilingual Projects

When managing multilingual projects, the first decision to be made is selecting the main language in which the project will be developed with conditions and logic, as well as, in which the copy will be composed. In this main language, the project is created in the same way as any monolingual project. Then, it is extended with additional languages, by creating the corresponding collections and translating the text parts.

The method of setting up the logic in a main language and transferring the logic and conditions to the subordinated languages has proven to be the most efficient way of handling multilingual projects. 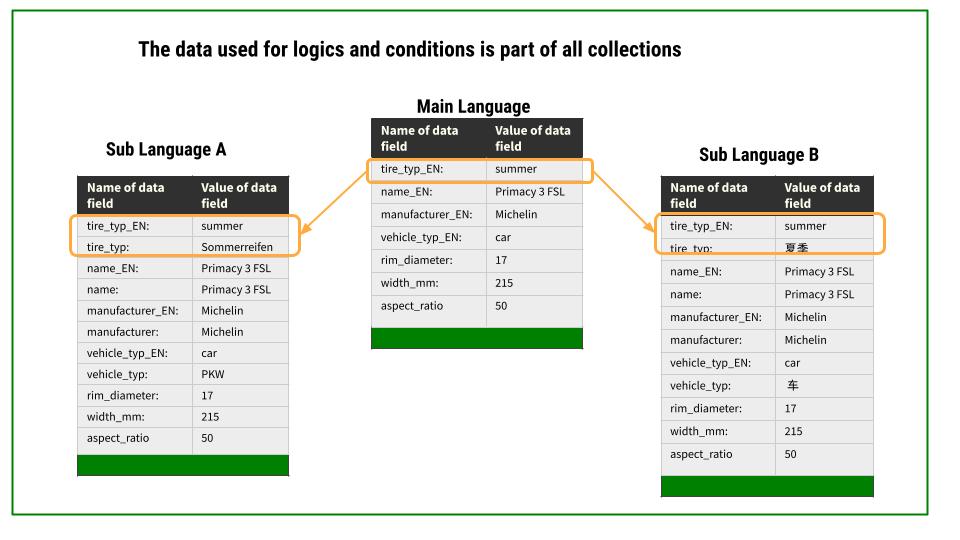 # Adding Languages to the Main Languages within the projects

As soon as you have created the collection of the main language, work on your text project begins, which proceeds in the same way as for monolingual projects: You write your statements based on a test object and take care of the right calculations, logic and triggers in the Transform tab.

In the next step you change the preview language and the Test object for the second language you want to use.

Then translation starts: You have to translate the parts of the project, that are not built from variables or data. For this you have to copy your statements with all associated branches and triggers and translate the statements into the sublanguage.