# How to Handle Verbs on the NLG Platform

Nouns (a person, place, thing, or concept) and verbs (words that describe an action, or state of being), are the heart and soul of all sentences. Verbs in particular are among the essential building blocks of communication in any language. Apart from short interjections, like "Caution!", there is no (complete) sentence without a verb. The verb controls the sentence structure and arranges the word order.

# Verbs are Relevant for Text Generation in two Areas:

# What to Expect in This Guide

# Verbs - How They Work in Language

Verbs can take different forms depending on their grammatical function. This phenomenon is called verbal inflection. These inflections are language-specific and usually depend on the subject of the phrase. Several properties of the subject and the sentence influence the inflection of the verb:

Verbs also affect the sentence structure itself: they are the ones that matter when it comes to the objects in the sentence. How many objects a sentence contains, or whether there is an object at all, depends on the verb, as does the case of each object (accusative, dative, genitive).

While simple verb forms as shown above, need only one complete verb, compound verbs are formed by combining a verb with one or more auxiliary verbs.

Compound verb forms are found in different settings, for example:

The main verb is often an infinitive or a participle. The participle may be adapted to the subject's number or gender, only if that is the case and if the subject is variable, it also has to be annotated.

In English, the modal verbs (can, could, may, might, must, shall, should, will, would) will never be inflected. Therefore you don't have to annotate them.

# Verbs on the NLG Platform

In a sentence, certain parts are dependent on others. If some parts of a sentence change, for example by changing data values, verbs may be required to change as well.

NLG software needs to know these dependencies, and we use a system of labels to mark (or annotate) that information in the text, it is used as a ruleset for generating correct text. If certain parts of the text change, for example, due to different data, all words referring to them can be adjusted correctly. 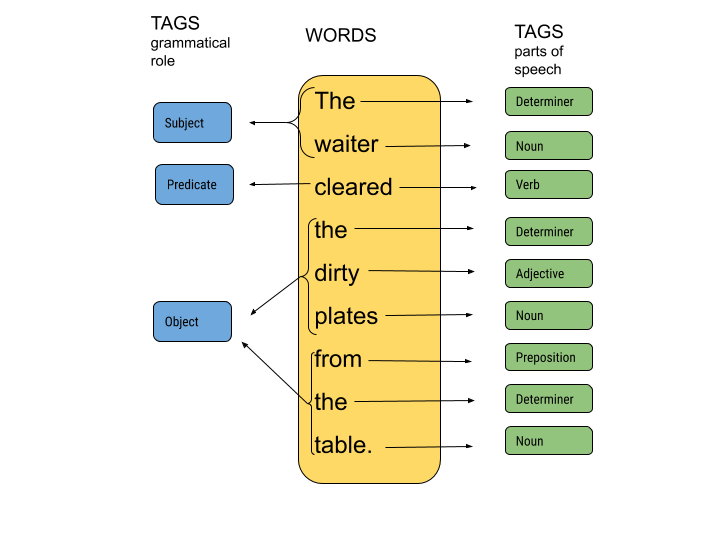 An important aspect of annotation is to group together all the words that belong to a label. On the NLG platform, the words are grouped on a functional level and then are managed together in a unit, which is called a container.

Two of the most important functions of containers are to store the reference to the variables or other nodes, and to hold information about the structure of a statement. Verb containers, unlike the other two container types, have the sole function of grammatical regulation because verbs cannot be derived from data or nodes.

The form that a verb takes is derived primarily from the subject. Depending on the properties of the subject, the verb changes. What other factors you need to determine, so that the verb outputs correctly, may vary depending on the language.

# The Components of Verb Containers

To configure a verb container you have to enter the lemma of the verb.

What is a lemma?

In the NLG Cloud, a lemma is the form of a verb that is used in a dictionary. For verbs, it is the infinitive, non-inflected form of the verb that is considered lemma.

On the NLG platform, there are two ways to configure verb containers:

# When to Create a Verb Container?

A rule of thumb for annotating and creating containers is to check if changes in the subject are possible for different data sets or conditions.

To keep the grammatical structure correct, you must create a container in case the sentence's subject is expected to change depending on the data.

When using compound verbs in a sentence, you only have to create containers for the auxiliary verb.

# English Lesson: How to create and configure verb containers

This lesson is also available in German with German example statements:

“Write with nouns and verbs, not with adjectives and adverbs.” (William, Elements of Style)

On the NLG platform, data values are very prominent because they form the basis for the statements and they also can appear directly as variables in the text. Nevertheless, when writing, it is worthwhile to start designing the sentences with the verb, because this can significantly increase the quality of the texts. The more precise and appropriate the verbs are, the more clear and understandable the text will be. And in addition to this, the verb is the element with the highest level of freedom for creativity in a text generation project, because it is usually not directly derived from your data, but completely your choice.

Use verbs as often as you can: Opting in for verbs over nouns will not only make your sentences flow better but also reduce your meaningless stopword count because you will avoid articles (e.g., an, the) and prepositions (e.g., in, on) which are required to make nouns work.

To be able to use the power of verbs skillfully, it is helpful to have an overview of verbs. Depending on their stylistic and grammar functions, verbs can be divided into two main categories. Actually, the auxiliary verbs as found above under compound verbs belong here as a third category. But they are not as crucial for the style of a text as the verbs of the other two categories.

Action verbs are all verbs that show action. They make sentences vivid. These are the verbs you should use whenever possible.

These three verbs are always linking verbs: to be, to become, and to seem. There are verbs that can be linking verbs in some cases but are action verbs in other cases. If you can substitute the verb with is it is probably a linking verb.

# How to Choose the Right Verbs

One rule of thumb is to choose the verb that carries a specific meaning over more generic verbs. In many cases, it is the linking verbs that tend to be less precise and thus weaker than action verbs. Correct weak verbs by omitting them and replacing them with a more meaningful verb. Notice that you will need to add information as you specify the nature of the action.

If you search your text on linking verbs or weak verbs, you will also discover other stylistic weaknesses, such as nominalization or passive voice, because they usually go hand in hand.

A good way to make writing better is to check for linking verbs, and then try to replace them with action verbs. This eliminates many stylistic weaknesses (such as nominal or passive constructions).

# Look for the Most Concise Verbs

But it is not always linking verbs that are too generic to make a text colourful and precise. Other verbs can be weak as well. Try to find the most accurate verb. They usually don't need to rely on an adverb or another addition to be precise:

Do you want to learn more about writing on the NLG platform? The guide Write Firstopen in new window shows how the software assists you as a writer in NLG projects.